The bylaws set forth the official name, boundaries, guidelines and rules recognized by Bend City Council.

During a meeting on October 1, 2001, three organizers volunteered to craft the Neighborhood Association Bylaws which were later reviewed and discussed during the October 29, 2001 general meeting.

At the October 1, 2001 meeting, three organizers stepped forward and volunteered to craft the Neighborhood Association Bylaws for review by the other organizers and the general membership. During the October 29 meeting, neighborhood residents in attendance discussed the crafted bylaws, and voted unanimously to accept them. 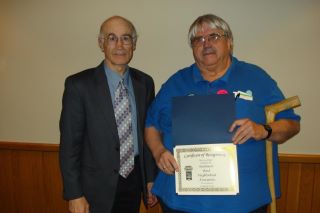 Then city Councilor Jim Clinton presented a certificate of recognition to the SBNA’s then President, Mike Lovely, at the November 16, 2011 City Council meeting. Jim Clinton was the first President of the SBNA, and one of three organizers who volunteered to craft the Neighborhood Association Bylaws in October 2001 along with Mike Lovely.