The Southwest Bend Neighborhood Association would like to recognize the passing of one of its beloved founders, Mike Lovely.  Mike passed away on July 2, 2021, just months shy of the 20 year anniversary of the Association, of which he was a founding member and instrumental participant along with Jim Clinton in the crafting of its by-laws in October 2001.

Mike, who moved to Bend in 1978, was an active participant in the community from day one of his arrival. He meticulously tracked City of Bend issues for countless years, attending City Council meetings, belonging to multiple committees, and serving in leadership roles in the SBNA, including Vice President, and then as President from 2004 until 2015, when health issues caused him to step back from a day-to-day role on the Board.

Mike had a strong personality and he didn’t mince words. He worked with fervor to ensure upholding the principles of equality, respect and civic responsibility.  He cared for our community and worked tirelessly to have the Southwest Bend voice heard in the greater community.  Mike set a great example for other neighborhood leaders, always knowing what was going on in the neighborhood and being a valuable resource on the history of this area.  Without Mike, much of the history of Southwest Bend is lost.  He will be missed greatly.  May his memory live on in the streets, parks and initiatives of Southwest Bend forever.  There’s no doubt he will be watching the progress from above.  Thank you Mike.  May you rest in peace.

To learn more about Mike’s life and his many interests, follow this link: 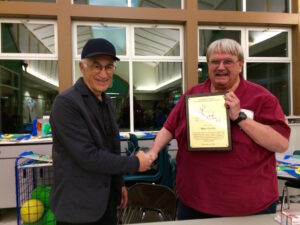 Jim Clinton (L) presenting Mike Lovely (R) with a plaque honoring his years of service to the SBNA.